I thought I might start here.  So many fertility doctors (in fact, all kinds of doctors) think this is simply a fertility problem.  Had recurrent loss?  It's the MTHFR gene - take some folic acid and call it a day.  Ummm... wrong!  MTHFR mutations affect everything we do, the day to day, and the distant far off future!  Visit here to see a list of 63 different illness associated with these mutations, from autism to blood clotting, schizophrenia, stroke, and fibromyalsia.  How does it all work?  Like this!'

We are made from a male and a female.  We get 23 chromosomes from the male, and 23 from the female, so we get one MTHFR from the mom and one from the dad.  If your mom or dad has a mutation, they may pass it on to you.  Some of us get only one mutation, some of us get two.  One is called a heterzygous mutation.  Two mutations are called a homozygous mutation.  Additionally, there are two types of mutations, known only by their number names: 677 and 1298.  So you could get one good gene and one 677.  Or one 1298 and one good gene.  The combinations appear below:

Those with the 677 mutation are more predisposed to vascular issues, such as clotting, stroke, and heart attack.  If you have two 677 mutations, you have a higher risk than those carrying only one mutation.  Those with the 1298 mutation have more issues filtering toxins from their bodies, so they should focus on eating foods that limit preservatives or pesticides.  Those with one of each mutation are at risk for both.  Interestingly, I read here that 98% of all people with autism have one of each type of mutation.

Interestingly enough, we really had to fight to get my husband tested after reading this page.  Doctors didn't seem to think it was a big deal - after all, I was the one carrying the child, right?  Not so much.  If you looked at that list of illnesses above, I was concerned by what mutations my future children would have.  This is the image on that page: 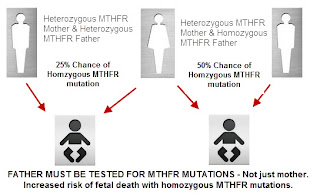 This seemed to make sense as we have already, at this point, lost three babies during pregnancy since we had my son.  So we had him tested.  He caries the compound heterozygous mutation, or one of each type.  Not only is he at an increased risk of blood issues, he can't filter toxins out of his system, either (which would make sense, as his liver numbers have always been wacky after taking prescription meds).  So we are on the right hand side of the chart.  We have a 25% chance that a child could have one 677 mutation, a 25% chance of one 1298 mutation, a 25% chance of two 1298 mutations, or a 25% chance of one 677 and one 1298.  None of them look particularly happy.  We have an appointment with Dr. Kwak Kim (a reproductive immunologist at Rosalind Frankin University) to discuss what, if anything, this means if we were to want to have more children.

I debated on having my son genotyped (he will be three in October of 2013).  We decided to wait a year.  I will go into that on my next post (since he is asking me for some apples, and I can't say no to choosing a healthy snack!)
Posted by -One Bad MTHFR at 12:44 PM

-One Bad MTHFR
Welcome! I am One Bad MTHFR. I married my husband, A Total MTHFR, in 2005. A Total MTHFR and I struggled to conceive our first born, A Questionable MTHFR, born in 2010. It took us a year to conceive him, I suffered hyeremesis throughout the pregnancy, had complications during delivery, and delivered via c-section. Since my A Questionable MTHFR's birth, we have lost three babies during pregnancy. After searching, we now know I have a heterozygous A1298C mutation, and A Total MTHFR is compound heterozygous for both mutations. This is our story. Much of this is research we are using to make ourselves healthy, avoid illness associated with the mutation, and come to understand life with one child.